Italvolt has signed an agreement purchasing one million square metres of land as part of the strategic advancement of its 45 GWh gigafactory project. 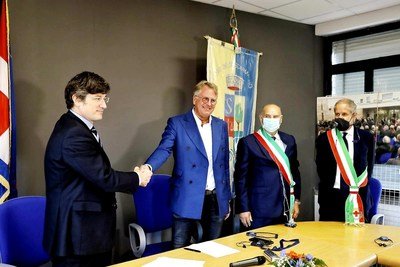 Italvolt founder Lars Carlstrom at the land purchasing signing ceremony in Scarmagno where its future 45 GWh gigafactory will be built. Image: Italvolt Spa

Italvolt Spa, the Italian gigafactory company founded by Lars Carlstrom to create one of the largest gigafactories in Europe has signed an agreement with Prelios Sgr, manager of Fondo Monteverdi, for the purchase of an area of one million square metres. The purchase adds to an overall investment of around 3.4 billion euros.

The purchased land is located in the municipality of Scarmagno, which is in Italy’s second-largest region of Piedmont, where the former Olivetti typewriter factory stood. Italvolt’s gigafactory, once fully operational, is destined to become one of Europe’s largest production and storage sites of lithium batteries for electric vehicles, with a planned capacity of 45 GWh.

Lars Carlstrom, CEO and Founder of Italvolt, stated: “The agreement with Prelios Sgr represents a crucial step in the implementation plan of our gigafactory project. We are delighted to have concluded the purchase of the land with input from local authorities. In recent months they have made a significant contribution to the promotion of Italvolt’s project. The decommissioned site offers excellent potential to restore the local industrial heritage, offering jobs and environmental improvements”.

The site in Scarmagno, which is part of Piedmont, the leading region in Italy for automotive industrial production, has been selected for its existing infrastructure and strategic geographical location in terms of road and rail connections. The land will be reclaimed and repurposed by Italvolt, dedicating an area of 300 thousand square metres to constructing the new plant. Out of this, 20 thousand square metres will be dedicated to creating a Research & Development centre.

Italvolt aims to obtain building permits by the beginning of 2022 so work can begin in the second half of the year. Pininfarina’s Architecture Division will design the new plant with a focus on environmental and social impact and intends to develop a “new generation” industrial plant integrated into the “economic and social fabric” of the region.

Patrick Del Bigio, CEO of Prelios Sgr, commented: “We are very pleased with the result achieved. The area that hosted the historic Olivetti will come back to life in the following months with a new industrial project focused on the business of electric mobility, which today presents itself as a highly strategic and innovative sector, just as Olivetti was in the 1960s in the IT sector.

“Therefore, the industrial heritage of the site remains intact with important socio-economic developments that will derive from the focus on green industrialization. With this focus, Prelios SGR has also been particularly committed and has contributed to the operation’s success, working in close coordination with representatives of the public administration and all the other actors involved, as well as defining the best value of the real estate asset”.

You can find more information about the Itavolt, the Italian gigafactory company and the land purchase agreement on the company’s website.